International design hottie, Philipp Plein, had a gorgeous showroom at MAISON et OBJET this year—no surprise as the man is the guru for sleek-rock-n’-roll-bachelor. Hovering above a glamorous bedroom scape, was the most magnificent chandelier I have ever seen and I had one of those “damn, I wish I’d thought of that!” moments, followed by a “why hasn’t that been done before—it’s perfection” moments. Peppered into a seemingly classic, though giant, all-white Murano glass chandelier are little Murano skulls (see below). AMAZING! 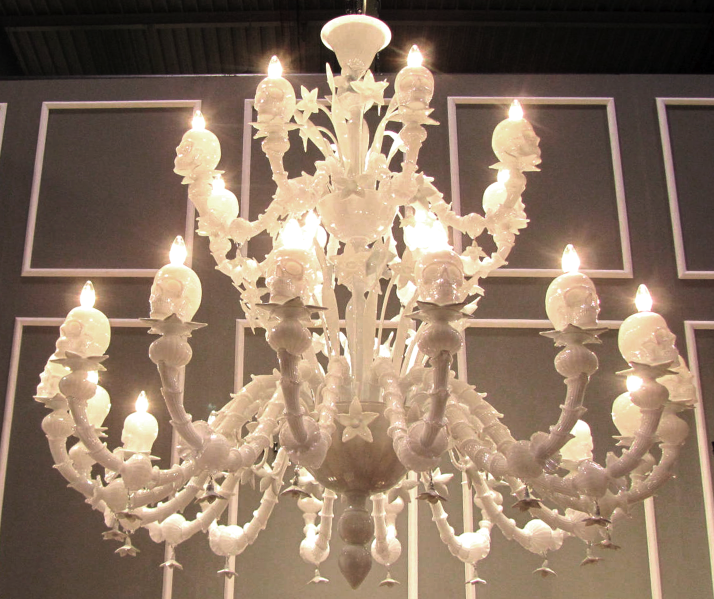 At the time I didn’t realize I was speaking with Plein himself nor was I (yet) aware of his affinity for the skull (as a shape and graphic), but—I know now—from his sheer use of the skull throughout his brand that he practically owns the rights to it—the way Missoni owns flame stitch—or at least he hopes to soon.

After walking away from the elegant man-space, I was like why don’t I know anything about this Philipp Plein? Turns out his current celebrity muse is Lindsay Lohan, which is exactly why I don’t know anything about him. Regardless, the fine German fellow is only 32 years old and has a huge fashion and decor empire based out of Amriswil, Switzerland. He’s got glossy, white shops in several major cities around the world (including Saint Tropez, Moscow, and one coming soon to New York and Hong Kong), where he carries some of his eleven different lifestyle categories: fashion for men, women & children, luggage, accessories; a home collection with indoor & outdoor furniture, decor accessories, dog accessories, lightning, and even a riding saddle. 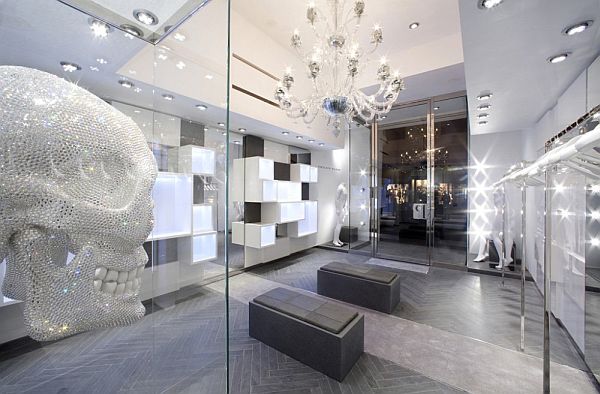 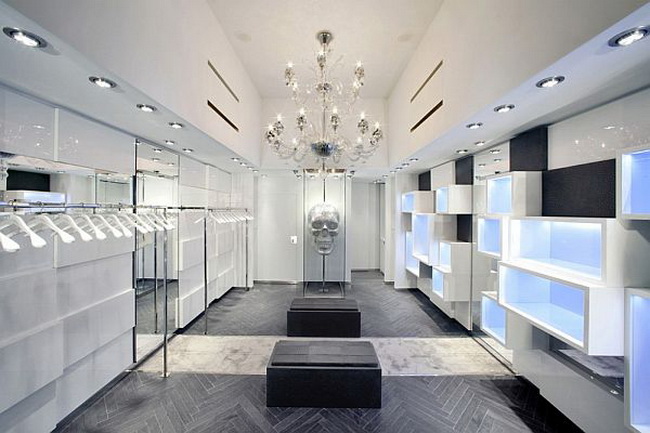 For a quick run-through of how cool this man is: at his very recent store opening in Duesseldorf, Germany (store photos above, note the giant Swarovski crystal skull), he was hanging out with the likes of Adrien Brody, there are rumors of him owning the 60-year-old and famous Munich night club, P1 (located inside the Haus der Kunst museum), and one of his newest stores (in Versilia, Italy) he designed in collaboration with very cool Milan-based architectural and design studio, AquiliAlberg.

All in all, the man is pretty fabulous—I’m jealous—but I’m still most impressed with the oversize white Murano skull chandelier I saw first hand in Paris.